Nausicaa Of The Valley Of The Wind Wiki
Register
Don't have an account?
Sign In
Advertisement
in: Male, People, Characters

Miralupa [1] is the Holy Dorok Emperor's younger brother. Due to his strong psychic abilities, he dominated his brother, the Holy Emperor Namulith, and controlled the Dorok Principalities.

Miralupa's face is rarely exposed, since he wears a hood at all times. His body is covered with mystical tattoos.[2] He must go into his immersion tank in order to preserve his aged body. Unlike his older brother who has undergone countless surgeries to preserve a youthful body, Miralupa's body is fragile and prone to bleeding and cracking. He must be submerged in his tank for long periods of time in order to preserve himself.

Miralupa has several superhuman abilities, including telekinesis and telepathy. It is said that his family has passed down these traits for generations.[3]

Miralupa is the younger brother of the Holy Emperor Namulith. However, because Namulith doesn't share his younger brother's special abilities, Miralupa soon seizes the real power and starts controlling Dorok through the Council of Monks. He becomes obsessed with finding Nausicaä once he learns of her existence, which is prophesied to threaten his rule. They meet several times and his spirit telepathically searches for her, where he appears to her as a black shadow.[4] (second attempt)

He arrives at the Seige of Sapata in his personal ship. There, he enters an Immersion Tank as he explains to the monks he is searching for Nausicaä [5] while Nausicaä arrives in Kushana's Armored Corvette. He detects her and attempts to leave his tank.[6] 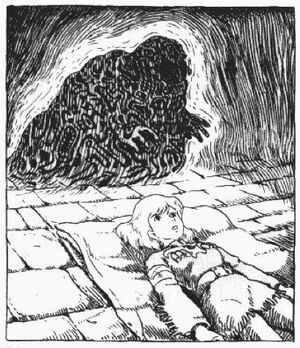 His dark spirit searches for Nausicaä after she is wounded[7] but she lays still and is able to avoid him[8]. His dark spirit appears as a large shadow that is blind, cold and filled with hate.

He is perilously wounded after the battle of Sapata, so the Monks start to transport him back to Shuwa to be healed. He deeply distrusts surgically acquiring a new body as Namulith does, so he has to be specially suspended in a tank.

During his immersion, he dreams that the surgeons have given him a more youthful body and rejoices that his aches and pains are gone, ridiculing his own fear of the surgery. But then his body starts to crack and break down in the same way his father died. He wakes from this nightmare and sees Namulith staring into his tank. He warns his older brother of the Blue Clad One foretold by the Dorok Prophecy, but Namulith dismisses him as other false Blue Clad Ones have been prophesied in the past. Namulith then informs his younger brother that he poisoned the tank's solution, killing his younger brother and taking back his power.[9].

After his death, Miralupa's spirit finds Nausicaä and attempts to kill her. Nausicaä manages to dissipate the shadow covering him and reveals his spirit's true form which resembles an emaciated old man. Nausicaä pities him and takes him along when Selm guides their spirits through the Sea of Corruption. Miralupa's spirit manages to find peace at the end of the Sea.

Community content is available under CC-BY-SA unless otherwise noted.
Advertisement