pg 43
The Torumekian Armored Corvette [1] is a large flying fortress with four wings. It is part of Kushana's forces and seems to be a staple of the Torumekian military.

The cockpit has several stations, including a large steering wheel and room for multiple crew. The rear end of the Corvette has a quick troop deployment space open to the elements. The ship is heavily armed.

The Corvette is faster than Bumblecrows and the giant insect Hebikera[2].

In the Story[edit | edit source]

The Corvette escapes the defeat at the Battle of the Acid Lakes. Kushana continues into the Dorok Principalities with the intent of joining up with the Torumekian Third Army and seize the throne. It encounters two Torumekian Strike Bombers attacking an Nameless Dorok Village and shoots them down. 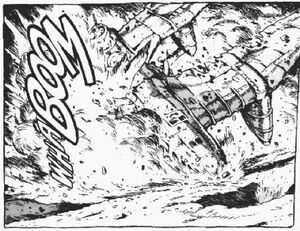 It crash lands in the midst of Dorok artillary fire at Sapata, where it is destroyed [3].

The Corvette is replaced when Kushana's men seize the Unnamed General's personal corvette[4], which has two wings and a V-tail.

Retrieved from "https://nausicaa.fandom.com/wiki/Torumekian_Armored_Corvette?oldid=7644"
Community content is available under CC-BY-SA unless otherwise noted.