The Third Army [1] is the Torumekian army trained by Kushana. She "forged them into the Empire's finest." They have deep loyalty to Kushana.

Kushana's plan [2] was to bring the Third Army back to the capital and seize the crown.

The Fate of the Third Army [3] lead to it's near destruction. The Third Army was ordered by the Three Princes to cover the Torumekian army withdrawal after the Doroks used Weaponized Miasma and counter attacked. Each regiment held one captured Dorok stronghold with no air support or heavy weapons. 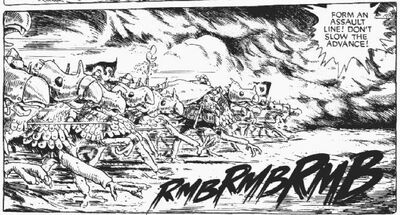 The First Regiment held Sapata, surrounded by Dorok forces. Kushana arrived and took over command. She lead the last major cavalry charge of the war [4] before escaping the siege.

The Third Regiment [6] were mostly wiped out in an unknown Dorok city.

Retrieved from "https://nausicaa.fandom.com/wiki/Torumekian_Third_Army?oldid=6942"
Community content is available under CC-BY-SA unless otherwise noted.